Errol, Woodsie and me 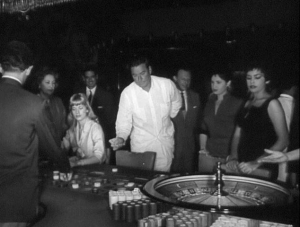 In between dancing jobs I had a son to support. I had left Tito and needed to have a life of my own. I had picked a wonderful godfather for my son; he was also the father of one of the real Godfathers.  He was always around helping me out. This man was a friend of Tito’s but convinced me that there was no future in that relationship and I had to move on, which I did.

He had connections all over town and I decided to throw parties in clubs that needed some fun and spark.  The first club was called “The African Room.” It was located on 3rd Avenue in the 50s in NYC. I would charge at the door and get a piece of the bar. I had crossed over to the American scene by then and met lots of interesting people.  I hung out with Johnny Nicolson who had an exclusive restaurant with a great guest list. I got to know Monti Rock who also had a crazy guest list, and Joyce Greller who knew many  comics as she was a comedy writer. She would bring in Buck Henry and his crew, and so many different groups of dancers from the Palladium, the R&B singers who were managed by some heavy people, and mix it all up with Gays, Pimps and Hookers.

One night Errol Flynn walked in with his girlfriend who he called Woodsie, a beautiful blonde totally in love with him and ready to party. We became fast friends. They were on their way to Cuba to do a movie and I was on my way to work in the Tropicana. We promised to meet up and every night after my show I would get together with them at the Capri Hotel. I went on the set and Errol introduced me to his pet monkey, which he had taught to perform some crazy tricks.

The revolution had started and we all left Cuba. We were to meet up at my new club called Ida’s Hangup.  A couple of years later Errol came by to wish me well and days later I heard he had passed. He and Woodsie were a wonderful couple and just recently I found out she passed also at a young age. They are finally together. Rest in Peace my friends.