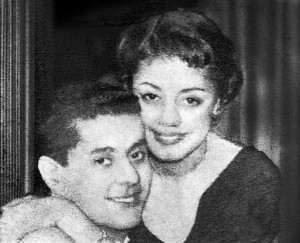 I had been seeing Tito after school practically every day. I told my mother I had a babysitting job after school, and as long as i was home before 6PM, it was OK. I was attending All Saints Commercial High School studying typing, steno, and bookkeeping, getting ready for a secretarial job. I graduated at 16 and went to work for a rep for a publishing company in NYC. My afternoon sessions had stopped but Tito continued to meet me for lunch or after work.

One day he decided to take me to his mother’s apartment so I could meet her. I was very excited because I thought this meant an impending marriage. His mother lived on the first floor of 979 Intervale Avenue in the Bronx. She rented out a room to supplement her income and the little money Tito would throw her way. He showed me his room where there was a piano on which he composed most of his music. Salvatore was a gay man who rented another room and helped with the cleaning and cooking, and also took her to doctor’s appointments. Everything looked normal to me, but when I asked where his father was, Tito told me to shut up, he would tell me about that another time. It was obvious, however, that he did not live with his mother ( I would later meet the father in Brooklyn. where he worked). There were many secrets in this family. Salvatore took me aside and told me to not ask any questions, as Tito was very touchy about this subject.

I visited that apartment many times and I always thought that was where Tito lived, except the times when he was too tired to go back home, so he stayed in a room he kept at the Alvin Hotel or the Bryant Hotel.

There were always vicious women, who were petty, jealous, and bearers of bad news – I have seen them spread the evil venom that came out of their mouths. They never said anything good about anyone, and didn’t think twice about breaking somepne’s heart in a minute, without any remorse. I walked into the Palladium once and one of these gossip mongers told me: “ You should have been here an hour ago. Tito’s wife just left.” I looked at her like she was joking, but she went on: “Don’t tell me you don’t know!”

I ran out of the bathroom and over to Tito, screaming at him. He was quick; he held me down, took me out the back door trying to calm me down, and explained to me that it wasn’t true. I could not speak as I was moaning and crying; I just wanted to die. I jumped into the first cab and went to my home in Brooklyn, thinking all the way about how this could have happened to me.I was going out with Tito for over a year and no one ever mentioned anything about a wife!